As you anticipate the upcoming turkey season, you may be thinking about your shotgun and choke setup and ways to improve it. Unlike wing shooting, turkey hunting is all about tight, dense patterns. The ability to deliver as many pellets as possible into a 10-inch circle or less at range is what most turkey hunters strive for.

In this review, we’ll discuss some of the top picks for turkey chokes that can deliver tight patterns and help you narrow down your search if you need to pick up a new choke tube this season.

These are three of the best turkey chokes available which are affordable as well:

The Carlson’s Longbeard XR Choke Tube was specifically designed to pattern great out of the packaging with Winchester’s Long Beard Ammunition. Extensive testing went into development of this choke tube and the results are nothing short of amazing for turkey hunting.

Shot-Lok Technology allows for some of the densest patterns we’ve ever seen at over 50 yards compared to conventional choke tubes. The combination of the Longbeard XR Choke Tube and LongBeard Ammo serves-up 10% greater penetration for lead loads up to and exceeding 50 yards. 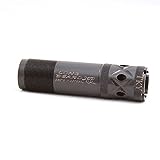 The Primos Jelly Head Maximum Choke’s sole purpose is to deliver tight patterns at long ranges for turkey hunting. It features an extended taper and fluted ports to increase patterns by up to 20% and reduce felt recoil making follow up shots easier.

The Primos Jelly Head is constructed out of premium stainless steel with a “Black-T” protective coating for added corrosion resistance and durability. It’s available for Remington, Mossberg, Browning, Beretta, and Benelli shotguns. 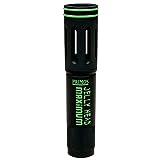 Tungsten Super Shot (TSS) is the densest shot that is available for turkeys. It weighs in at 18g/cc. Lead is around 11g/cc and steel is 7.8g/cc for comparison. Carlson’s has developed the TSS Turkey Choke for turkey hunters who want to take advantage of best ammo on the market.

The TSS Choke Tube is available for the following models:

The Carlson’s TSS Choke Tube is designed specifically for the new Federal Premium Heavyweight TSS ammunition. With very few TSS ammo options being manufactured, it’s nice to know that these two paired up to design something that works. TSS packs a punch in small pellet sizes due to it’s density. This makes 7s, 8s, and even 9-shot viable turkey shot sizes. This maximizes the amount of pellets in the load and it’s not unheard of to put 90% or more in a 10-inch circle at 40 yards. 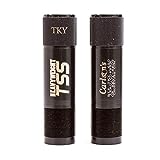 You may think a turkey choke and full choke are the same, but this isn’t always the case. If you mainly hunt waterfowl, the full choke is often considered the tightest patterning choke available. However, turkey chokes go a step beyond a regular full choke to provide even tighter constrictions.

The sport of turkey hunting is focused around the equipment almost as much as the hunt itself. Let’s face it, the season isn’t all that long, so it allows for loads of time to sit and think about different tactics to use for next season. Turkey chokes are an important piece to the equation and finding the perfect patterning shotgun, choke, and ammo combination can mean the difference between bagging a bird with the longest beard or going home empty handed.

Once of the best patterning chokes right out of the package is Carlson’s XR Longbeard choke tube. It was specifically designed to work well with the XR Longbeard line of ammo. The Primos Jelly Head is another option for a tight patterning choke tube that seems to work well across a wide range of ammo. Finally, the new Carlson’s TSS choke tube is something to consider if you’re interested in trying out TSS shot and increasing your range and pattern density to the max.