Whether you hunt turkeys or waterfowl, TSS ammo is ballistically superior to every other type of shot currently available. This super dense material has completely revolutionized the way hunters go about harvesting game and dramatically increases success in the field.

In this review, we’ll discuss what TSS ammo is and why it’s the most popular new shot available to hunters today.

What is TSS Ammo?

TSS stands for Tungsten Super Shot and is the ambiguous term used to describe the shot across the hunting industry today.  TSS is made up of almost pure tungsten at 18 g/cc (pure tungsten is 19.25 g/cc for comparison).  It was first made available as a reloading package around 2010 but was subsequently phased out. Individuals in the reloading community then began to source their own TSS from Chinese suppliers and began providing loose shot in bulk quantities.

The popularity of TSS ammo has since grown due to its devastating ballistic effects, and what was once largely limited to the reloading community, has expanded to ammo manufacturers such as Federal, Remington, and Browning who have all jumped on board to offer factory loaded TSS turkey ammunition.

Why does TSS ammo pattern so tight?

Denser materials, like TSS, are less affected by outside forces such as drag, drift, and friction which cause pellets to slow down or change their trajectory as they move down range. This means TSS shot columns stay compact longer which provides tight patterns at longer distances.

For waterfowl, an open choke tube is best for allowing the pattern to spread quicker for fast shots on moving birds. Cylinder, skeet, and improved cylinder chokes work best. 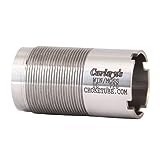 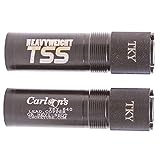 What TSS ammo is currently available?

Browning TSS Ammo (check price at Cabelas) – Browning’s TSS Tungsten Turkey Shotshells are available for the 12 ga in both 3-inch and 3.5-inch versions. Each are 1200 fps and available with both #7 and #9 pellets. Browning also offers a duplex load of #7’s/#9’s for increased versatility in the field.

Reloading your own – The last option is order loose TSS pellets in bulk and reload your own shells. This is often the cheapest method.

Patterning TSS for waterfowl has been a challenge for me and I would consistently hit birds at 30 or 35 yards and miss the birds at 10 yards due to the small pattern diameter. Here are some things I have done to help get TSS to open up.

2) Put a hard wad or straight wad under the shot. If you have a lot of cushion under the shot, it will tighten your pattern. The hard surface under the shot acts as a disrupting force once the shot column is put into motion and it doesn’t allow the column to compress as tight.

3) Duplex TSS with steel in a combo using an open choke. Duplex loads aren’t anything new, but TSS tends to work well duplexed with steel shot. The steel opens up quicker to take birds down close range and the TSS does the job for longer range birds. If you happen to center a shot on close-range birds though, it will make swiss cheese out of the bird and that does happen occasionally.

Is TSS the best shot for turkeys and waterfowl?

TSS is the best all-around performing type of shot currently available for both waterfowl and turkey hunting. Its downrange energy cannot be matched by steel or other non-toxic pellets.

Below are some comparisons of several shot sizes types, and their ability to achieve 2.50″ of ballistics gel penetration at the listed range.

As you can see, even though TSS pellets are smaller, the greater density per pellet far outweighs the large, less dense pellets of other materials.

Below are the TSS pellet counts per ounce compared to lead and hevishot. TSS allows you to drop down 3-4 pellets sizes and increase pattern density while not sacrificing range.

TSS ammo works best for turkey hunting situations where you only need one shot and a dense pattern to harvest a bird cleanly and be done for the season. Since TSS is almost pure tungsten, it’s expensive to shoot in large quantities. Using TSS to fill specialized roles such as providing dense turkey patterns at over 50 yards is where it really shines, and the expense can be justified.

TSS use for waterfowl hunting is a growing trend, but mostly with the reloading community. Unless you’re a good shot, it may take 10 shells or more to get your limit. The cost for TSS ammunition can really build up over the course of a season hunting ducks and geese.

To make TSS more economical for waterfowl hunting, many choose to shoot light loads of an ounce or less which can bring the total cost per shell closer to $2 and inline with Hevishot and other heavier than steel alternatives. Even with light loads, TSS still provides adequate pellet density and range, without the sore shoulder or wallet.

Another trick waterfowlers use to make TSS stretch further is to duplex it with steel shot. This can help open the pattern up for close in shots, as well as retain the long range that TSS pellets provide. Finally, if cost isn’t an issue or you want to develop some long-range goose or coyote loads, there’s really no matching what TSS has to offer.

Click here to read more about some of the best choke tubes for turkey hunting.